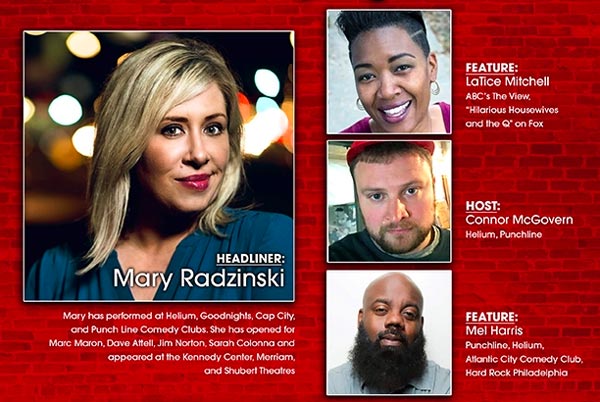 (CAMDEN, NJ) — South Camden Theatre Company will present another evening of laugh-out-loud stand-up comedy at the Waterfront South Theatre on Friday, June 24th at 8:00pm. They will provide the laughs, the drinks, and the food. Make sure to arrive by 7:30pm when the doors open to grab free snacks, and purchase Tonewood beer or glass of Moore Brother’s wine. Mary Radzinski headlines the night which includes LaTice Mitchell and Mel Harris. Tickets for the event are $20.

The fundraising team of Jordan Feld and Michael Fullam, once again bring a great evening of stand-up to the South Camden Theatre Company stage. They’ve been working tirelessly with host, Connor McGovern, a Philly stand-up comedian, to pull together a comedy series as good as it gets. This is the second of three comedy events they will be presenting this year along with their theatre series.

Mary Radzinski is the headliner of the night. Mary is a regular feature at Helium, Goodnights, Cap City, and Punch Line comedy clubs. She’s opened for comics including; Marc Maron, Dave Attell, Jim Norton, and Sarah Colonna. Mary was honored to open Marc Maron’s 2019 sold-out shows at the Kennedy Center, Merriam Theater, and Shubert Theatre. She opened for Jim Norton’s “Contextually Inadequate” comedy special taping at the Somerville Theater, as well as Rosie O’Donnell’s most recent HBO comedy special at Levity Live. Mary can also be seen on TruTV’s new series, “Greatest Ever”. Her debut comedy album, Discomfortable, is available on iTunes.

The two featured comics of the night include LaTice Mitchell (from Camden, NJ). LaTice is a comedian and actress. She travels city to city bringing her unique style of comedy to all audiences. She has been doing stand up comedy since January 2009 and has had quite the career thus far. From performing in Las Vegas for the World Series of Comedy, performing LIVE on ABC’s THE VIEW for “Hilarious Housewives”, and being picked by the late great David Brenner himself to tour in his “COMEDY STARS OF TOMORROW”, where she performed at the Valley Forge Casino in Pennsylvania for 4 nights. She brings guaranteed laughs!

The night is rounded out our evening  with Mel Harris, comedian, writer, host, actor, and producer. Known for his over the top freestyle comedy, lively stage presence and ability to make an audience just love him, Mell will truly make you laugh out loud. Mel realized he was a natural at the microphone after hosting a music showcase at the historic Philadelphia Clef Club of Jazz and Performing Arts. Trying his hand at comedy for the first time at the Millcreek Tavern in Philadelphia, Mel knew he was definitely on the right path when he returned two weeks later and found himself listed as a feature and his face plastered on the flyer.

Advertise with New Jersey Stage for $50-$100 per month, click here for info

The comedy night takes place at the Waterfront South Theatre (400 Jasper Street) in Camden, New Jersey. Tickets are $20 and available for purchase online.

The South Camden Theatre Company was incorporated on October 6, 2005. They are a professional theatre company. We work hard to produce our shows with paid actors, directors and designers. They are lead by a non-profit theatre board. The individuals who work on the board of directors are all volunteers. They do what they do out of love for theatre and for the community. Together, they produce some of the best theatre productions in the area. As Camden’s first professional theater theyenhance the community by creating quality artistic productions while anchoring The Waterfront South Arts District. They strive to promote South Camden’s rebirth as a destination by providing a positive experience for its residents and those from the surrounding region. Their goal is to entertain, engage, and educate.

Advertise with New Jersey Stage for $50-$100 per month, click here for info

Jan. 6 rioter from N.J. to serve 2 weeks in jail, 3 years’ probation for ‘parading’ inside U.S. Capitol

N.J. is becoming more diverse, but that change is not happening everywhere, study finds

BY: JANEL SPIEGEL | The Valley Ledger