The source of one of the most significant bodies of water in Camden County is believed to bubble up from underground streams into a former gravel pit deep in the Gibbsboro woods. 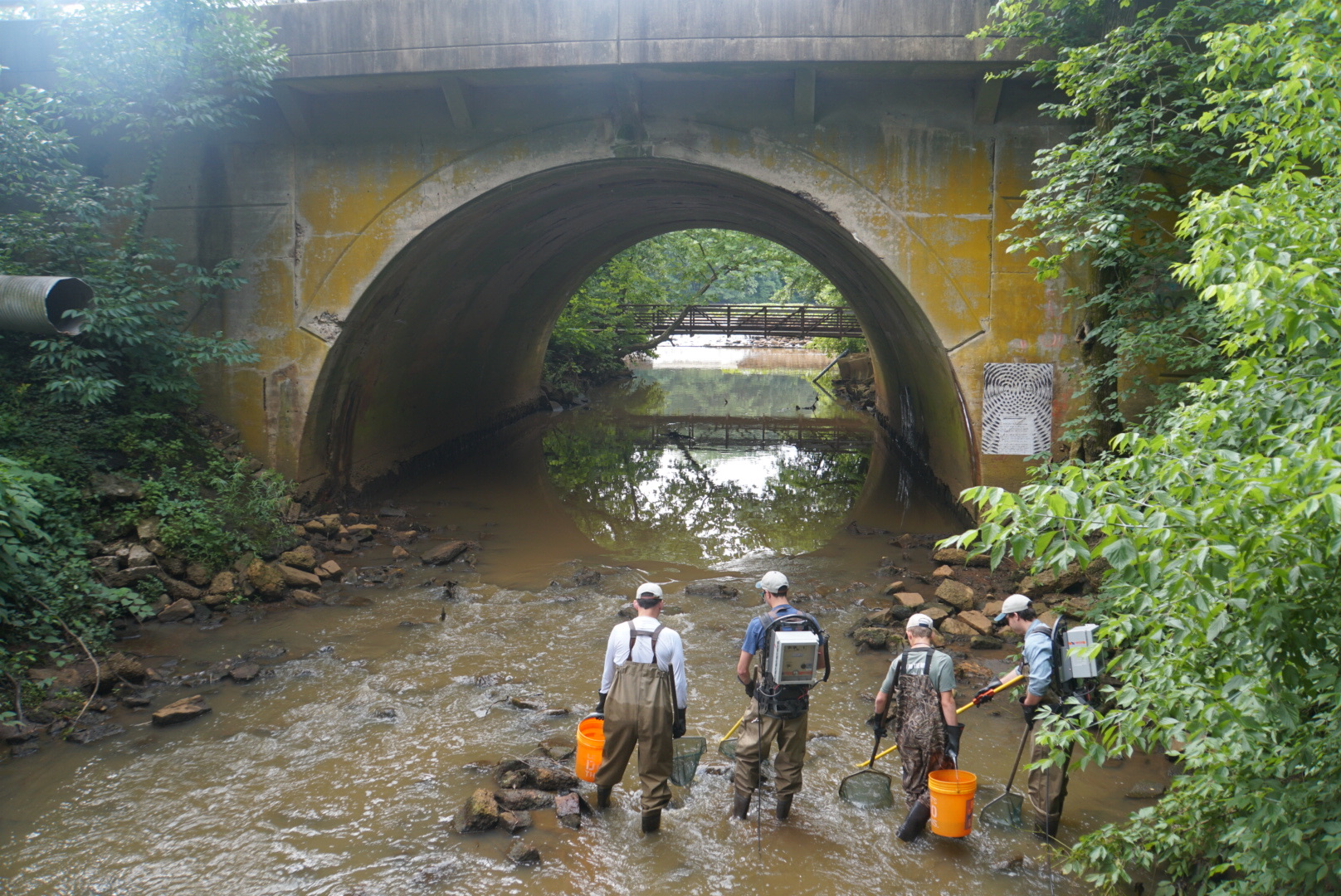 After a weeklong journey to chart an upstream path to the source of the Cooper River, a group of explorers backed by the Camden County Parks Department and the nonprofit Upstream Alliance returned home transformed by the experience.

Upstream Alliance president and founder Don Baugh, who organized the expedition, said that documenting the trip to the source of the Cooper River was “by far the most complicated” of the 300 nature expeditions he’s run in his life.

“The biggest issue is that it’s never been done,” Baugh said. “There’s a map of the river, but there’s not a guidebook. Where are the challenging spots? Where can you get out? Where are there thick greenbriars?”

“It was a real-life challenge, which is why I admire what the kids did,” he said.

Baugh heaped praise upon the youth explorers who joined the team, not only for meeting the “significant” challenges they faced along the journey, but for the sense of camaraderie they shared during the experience.

Along the journey, Baugh would check in with the explorers to see whether they were participating in “Type I” or “Type II” fun. 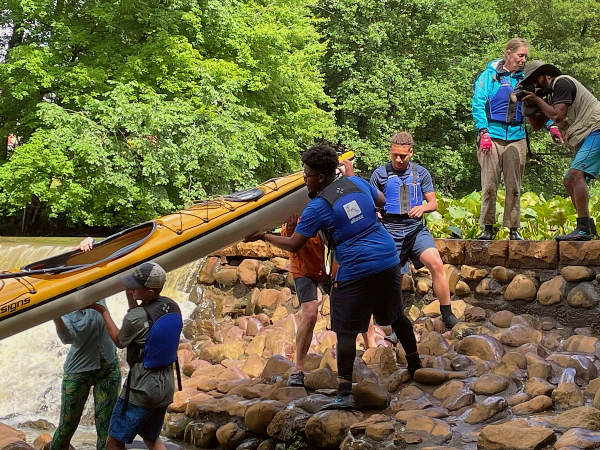 “Type I fun is fun when you’re actually doing it,” he said.

“Every day we asked everyone, ‘Is this Type I or Type II?’”

Work that fell into the category of Type II fun included portaging kayaks over dams, or maneuvering them around obstructions in the water, like fallen trees and the immense debris piles they attracted.

It meant facing escalating challenges as the trip unfolded, treading carefully through thorny patches of briars and brambles, fending off ticks and clouds of mosquitos, or simply seeking out solid footing in the marshy swamps.

Every day along the journey, Baugh held a straw poll among the expeditioners, asking whether they believed the group would find the river source or not. Up to the morning of the final day, the vote was split.

But eventually, the group came to a clearing in the woods of Gibbsboro where the forest broke into a glade with a pond of clear water, filled with sunfish.

Baugh said it seemed “almost like a movie set.” 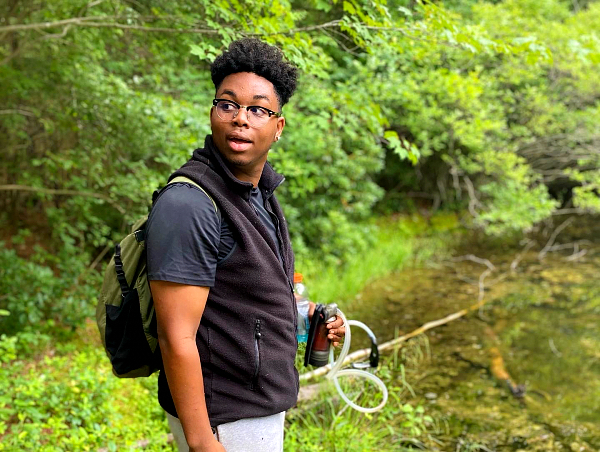 “It was an idyllic setting of a beautiful, forested, clear pond, that does not at all seem like the Cooper River,” he said.

“You see the nets of the sunfish, watching them swim in a circle to protect baby fish from the bass swimming by.”

About 10 feet north of the pond, Baugh observed a seepage of water into it; measured against what he described as the substantial outflow emerging from it, the group concluded it must be the headwaters of the Cooper River.

“It was kind of this ‘a-ha’ moment, where they’re seeing how clear and clean this water is where it starts, and how turbid it is at the mouth, where these kids live,” Baugh said.

“It was an experience to see the fish along the way; to see the water quality improve; to see the value of our watershed and sponges and swamps.” National Geographic photographer Anand Varma, who joined the group as a veteran of several far-flung nature expeditions, said he was struck by changing vistas as the waterway shifted from an urban to a rural environment.

The explorers began by ducking under concrete highway underpasses with outflow pipes, navigating tires and discarded motorbikes in the stream bed.

By the end of the journey, they were picking wild blueberries, spotting fish and bald eagles, and trying not to trample ferns on the forest floor.

“Just the feeling of that forest changing felt like I’m on the Appalachian trail, not the Cooper River,” Varma said.

“There was a moment where you couldn’t put your foot down without stepping on baby toadlets,” he said.

“I had never seen that many in that abundance. [There were]  dragonflies and damselflies everywhere; [there was] mountain laurel,” Varma said.

In charting a path for future groups to follow, the expeditioners hoped to ferry home a message of conservation along with their sense of adventure.

Varma said he hopes the information with which they return will inspire future travelers to share their experience, but also with an eye to keeping the area protected.

“You can’t just raise some money, blaze some trails, and it’s done,” he said. “You have to have a trail network that people know isn’t abandoned. 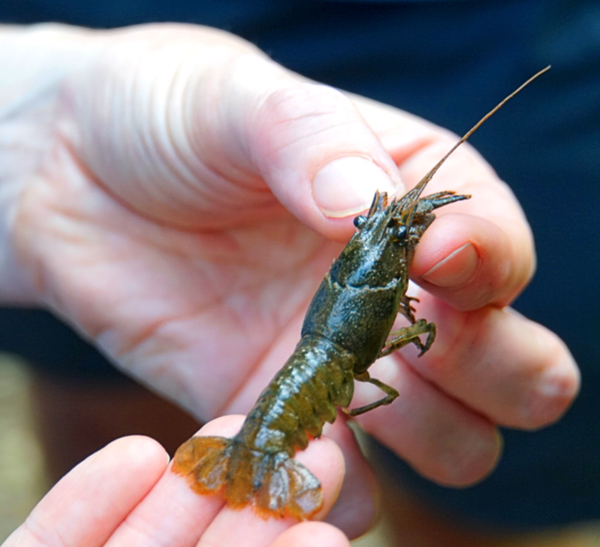 “If you build the trail in connection with a community awareness of this resource and show it off as this beautiful gem, I think you can bring better stewardship to those places than just leaving them to the winds of whoever wants to come by and dump things,” he said.

“It is a tension that has to be taken seriously.”

For Gibbsboro Mayor Ed Campbell, however, the source of the Cooper River is something lifelong natives of the borough have known about for generations.

Self-described as a kid who “grew up in the swamps,” Campbell was nonetheless excited for the expeditioners to have completed their journey.

“I think it was a great experience for them, and for the kids, who may have never played in or walked through a real swamp, it was an educational experience,” the mayor said.

“For the county, it does heighten the awareness that we have a big river and it starts somewhere as a little trickle.”

Campbell pointed out that the headwaters pond is situated near the convergence of four area watersheds: those of the Cooper River, Big Timber Creek, Great Egg Harbor, and Rancocas Creek.

“Some of the highest land in south jersey runs through the Gibbsboro-Voorhees border,” he said. “Everything to the west runs to the Delaware; to the east runs to the Atlantic Ocean.

“In my day, we grew up in the woods; we knew that story,” Campbell said. “I don’t think people who are there a short time know it. The expedition is great. It calls attention to it.”

For all his childhood experiences, Campbell said he hadn’t revisited the source in some 30 years, and was “pleasantly surprised” how much the greenery had reestablished itself around it.

The mayor described Gibbsboro as being a community focused on conservation, as evidenced by its efforts to acquire properties along the stream corridors in order to protect the watershed. 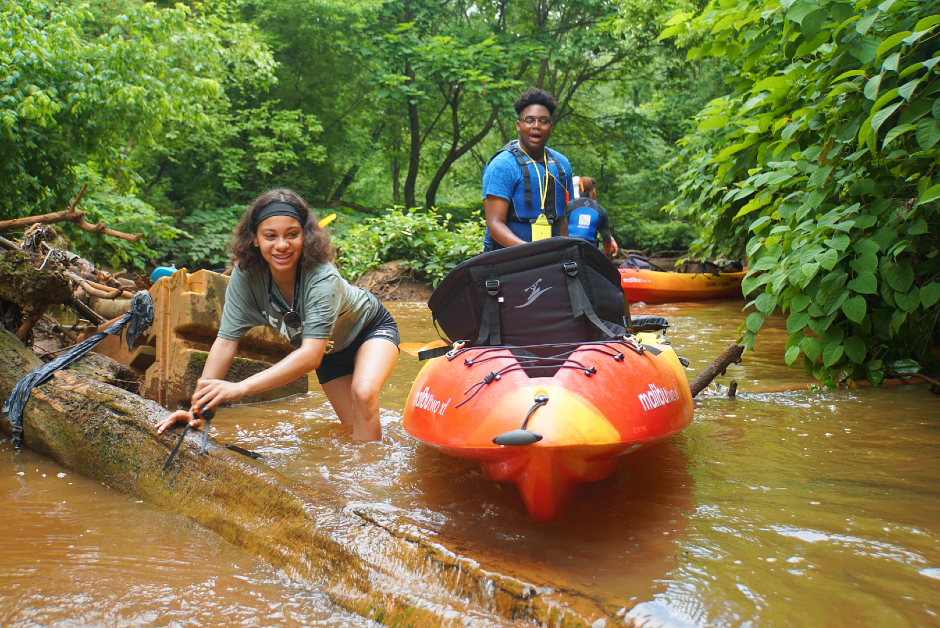 However, the borough has not, as yet, purchased the parcel of land on which the pond at the source of the Cooper is situated.

Presently, it belongs to Tri Borough Sand & Stone; Campbell believes the pond may have been created by gravel grinders some five or six decades earlier.

“We own most of the land area around the river,” he said.

“We do not own this specific parcel. It is in our plan someday to acquire.”

In addition to its significance to local heritage and the regional environment, the wetlands leading up to the source of the Cooper River are home to an endangered herb called helonias bullata, or “swamp pink,” which Campbell described as highly sensitive to water quality.

Prevalent only in portions of South Jersey, North Carolina, and Virginia, swamp pink earned the area a natural heritage priority site designation from the Office of Natural Lands Management. That establishes a 150-foot buffer at the edge of all wetlands areas, which should help prevent destructive encroachment.

“You have to have foresight and think beyond yourself,” he said. “What will the next generations have? People have to understand what is your obligation to sustaining this planet.

“If you look 50 years ahead, if we continue the trend in which we started the last century, it’s a pretty lousy future,” Campbell said. “The land provides for all of us.”

Registration for our Summer Enrichment Programs is now open